View source
Welcome to Supah Ninjas Wiki!
The wiki about Supah Ninjas that anyone can edit.
We are currently editing 128 articles and 376 images
Please read the Site Policy before you start editing!

The series revolves around Mike Fukanaga, the main protagonist, and his friends, Owen and Amanda. After the death of his grandfather, Mike is given a mysterious letter which leads him to discover that he comes from a long line of ninjas. With Owen, and later Amanda, they are ushered into the world of crime-fighting, forming the team "Supah Ninjas." They are trained with a hologram of Mike's grandfather, who Owen refers to as "Hologramps." 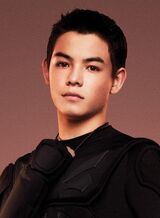 Michael "Mike" Fukanaga is quiet and a little shy, having never quite realized his potential. But his world is turned upside down when he discovers a secret underground dojo, where a hologram of his Grandpa awaits to train him in the ways of the Ninja. From the very beginning of the series, Mike has a crush on Amanda, being terrified to talk to her but very rash when he's in disquise. In the episode "Katara" Amanda kisses Mike to draw attention away from the fact that they were going through her purse. At first Mike is surprised at the kiss, but instantly relaxes and seems to enjoy kissing her. When they pull away, Mike stutters and loses his cool again. The kiss is seemingly an awkward topic, as it isn't brought up again...(read more)

Mr. Bradford is the sixth episode of Supah Ninjas.
Amanda's favorite teacher, Mr. Bradford, seems to be living a double life. By day, he's her teacher, by night, he's looking for a cure to a deadly disease using bugs. The gang sneaks in after school to try and find out what he is doing, and manage to fight him in the process. Mr. Bradford injects some "poison" into Amanda to see if his cure will work. In the end, he saves Amanda by injecting the cure into her body, not saving himself.

See more at the Poll Archive

It looks like there's no news about an upcoming season, and there isn't anything on Zap2It... :(

Cross your fingers for another season!

A lot of the new villains are going to be students, that kinda's cool