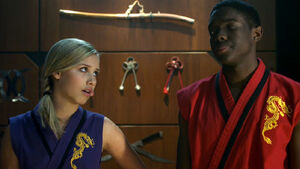 Omanda (O/wen and A/manda) is the relationship between Owen and Amanda don't show much interest in each other and are at the most friends, but the two are always aging and teasing each other. This could be a way that they hide there true feelings from each other. Of course this is only fan speculation, though they could be a possible couple later in the series.

The only episode where they act almost like a couple is "Eternum", where they had to take care of an egg. The two took the parenting project way too seriously. They hugged at the end of the episode (Not to mention crushing the egg). However, this is the only one so far where they had a potential relationship.